Carlos, the creator of the tortilla in a capsule 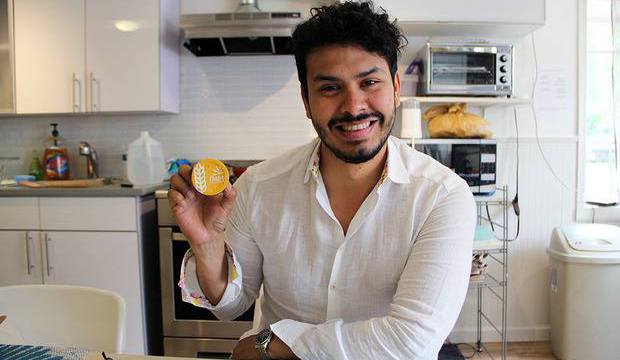 Once upon a time, in the tortilla country

Once upon a time in the tortilla country there was a small dough ball that nobody wanted to cook. Every day the small dough ball saw her precooked fellows of the grocery stores be heated and eaten by greedy mouths. The small dough ball had thought to join the kitchen of young gourmands, but no one had the time to knead it, crush it and brown it in a pan.

Depressed about being left behind, the small dough ball was close to suicide… But her life took a new turn, when Carlos Ruiz, the biggest tortilla eater of the tortilla country, presented him his new machine: Flatev. Taking pity on the new wretched small dough ball, the Epicurean said: “Jump into this capsule, and I will make you the fastest tortilla ever prepared!”.

This could be the Disney version of Carlos Ruiz’s story and its revolutionary flatbread machine. But because at Röstigraben we are serious guys (still!), we present you with a slightly less watered down version of the story of this young Mexican entrepreneur. Love at first sight of a Mexican for a coffee maker

Everything begins when Carlos Ruiz, left his native Mexico to continue his studies at the University of Zurich (Switzerland), invites his new friends to try a typical dish of his country: the Mexican tortillas! But the young student quickly encounters many difficulties. After many unsuccessful attempts, and facing his kitchen with flour everywhere, Carlos surrenders and falls back on pre-cooked tortillas purchased at the supermarket.

Honestly, the tortillas that are ready to use have got no good taste and consistency and are also very dry. At the least, they never will be like a real Mexican tortilla! However, Carlos wants to save face in front of his guests and offers them a coffee to catch up with the case. And so he get’s a flash of inspiration!

It is so easy and fast to prepare a coffee today! With our capsules machines, the brew is ready to be enjoyed in just a few seconds. So why not do the same with Mexican tortillas?

A collaboration with a promising future

Unable to realize such a machine alone, Carlos turns to his friend Jonas Müller, studying at that time at the ETH Zurich. Immediately excited about the idea, despite having never eaten tortillas, the future engineer launches into the creation of a first prototype in his garage. In this way, the project turns into a real company called Flatev (contraction of “flatbread” and “evolution”).

Several start-up contest wins later, Sébastien Kulling, who spent 10 years and worked at Nestlé Nespresso development, joined the young company that exports to the United States with the help of swissnex – the largest platform for knowledge and expertise exchange available for Swiss entrepreneurs who want to start their businesses across the Atlantic and around the world. Unfortunately for the founders of Flatev, the Swiss often prefer French baguettes to Mexican tortillas.

Thanks to swissnex and his special “camps”, designed for the training of young entrepreneurs, Flatev receives professional advice, gets access to a network of investors and opens its first office in New York. This is something worth investing in, since within the US market tortilla consumption has already reached $ 10 billion!

And Carlos Ruiz is already looking ahead: “Flatbreads are eaten in many countries where our machine should find its place”. The Turkish pitas, the naans, the Indian chapatis, the Italian piadina… if you think about it, the flatbreads are everywhere! Maybe one day Carlos Ruiz will even develop some rosti flatbreads in a capsule?!!

Follow the progress of Carlos and his friends’ company on flatev.com.

Do you also have innovative ideas that could be of interest to swissnex? Then contact the platform for Swiss startups abroad at the swissnex website.

Previous post:
These two entrepreneurs are « ready to cook » for China Next Post:
Home.Global, a startup that helps students