Keep your eyes on Elsium, A startup that will make you slide 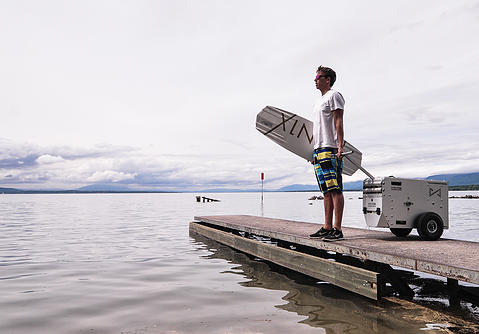 « If everybody had an ocean (..) Then everybody’d be surfin’ ». That’s the old dream that made the Beach Boys in 1963. Nonetheless, its not about oceans being a scarce resource, its about the inability for all of us to enjoy them and surf their waves.

After years of struggle, two friends found a magical trick. Sacha Martin – yes that young architect that we introduced you to that time – along with Ernesto Aramburo they’ve created a new generation of traction systems. Seems so easy once it’s been done – just had to come up with the idea, right? Not quite, we all know it’s about the execution though.

This new invention has a simple name: ARIA. It’s the newest creation of Elsium, a well-known startup in the industry. It lets you wake board, surf & snowboard… in other words, something that can float above the ocean, slide on top of the Everest or glide on your average backyard pond. What is the real innovation in this? The process is simple: Thanks to a pulley system, it lets you ride 200 meters from point A to B and… back! No need for crazy artillery here, just an autonomous machine that weighs about 40 kilos.

This silent-electric engine lets you ride for hours, with a top speed of around 50km/h. You can use Aria on your own and control it easily with its wireless controller. Best of all, it only takes 10 minutes to set the whole thing up.

On top of being light, small, autonomous & noise-less, the machine has no impact on the environment whatsoever… Take my money NOW! The goal is to give the opportunity to anyone, with or without experience, to enjoy the joys of sliding on water.

It’s not Ernesto’s first prototype; he’s worked on many traction systems in the past – read more about those here – but they only worked one-way. The trick was to create a system that also lets you perform during your way back eliminating the hassle of carrying it.

Summer 2014 was the technical test phase whereas summer 2015 will be testing the commercial side of things. These two entrepreneurs are currently looking to raise additional funds to develop the project internationally. They’ve had numerous feedbacks from investors globally. The major source of interest has been investors from Australia, which came as a surprise to the ambitious pair.

A lot of ski resorts have shown interest in testing the product this winter and they are currently working on making it perfect for snow surfaces, they’re always adapting to changes. The team won’t have a lot of days off in 2016 as the demand for testing is at an all-time-high. They are currently on trial in Crans-Montana (Swiss Alps), and you will most probably see them all around Europe at resorts’ tradeshows & various festivals.

You will then be proudly reminded of Lac Léman, ARIA’s birthplace.