The NYC swiss ball, a tradition dating back to the roaring twenties 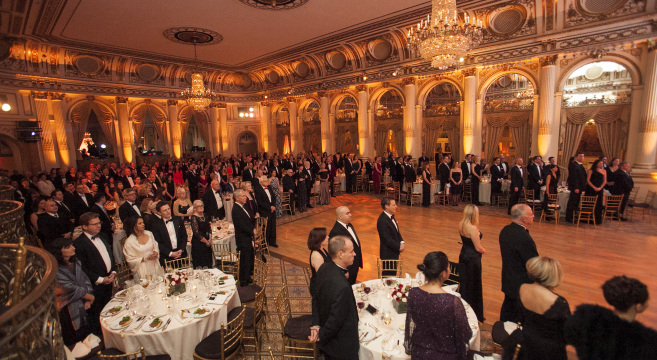 For 132 years, the Swiss Society of New York, Inc. continues to be a vibrant link in the Swiss-American community of the Greater New York area. The cornerstone of these activities is the annual Swiss Ball, the annual gala fundraiser of the Swiss Society, which is held under the patronage of the Consul General of Switzerland in New York. The Swiss Community joins to celebrate their Swiss culture and heritage at the Swiss Ball, a tradition that goes back to the roaring twenties. The 2015 Swiss Ball was held at one of the world’s most elegant and renowned hotels, The Plaza. Over 300 guests joined this year’s gala, which was held under the patronage of H.E. Ambassador André Schaller, Consul General of Switzerland in New York.

“The Swiss Society of New York is happy to honor Marthe Keller for her lifetime achievements that extend from acting in theater, film and TV to directing operas. Her achievements fill the Swiss community and the friends of Switzerland in New York with pride and gratitude.” The very popular Silent Auction, which is the sole means of fundraising for the Swiss Society Fellowship Prize and charitable activities throughout the year, reached a record result this year. Marthe Keller has dedicated the Fellowship Prize 2015 to the students of the Ecole du Théatre des Teintureries in Lausanne for a project with a New York based Theater company.

The Swiss Community enjoyed a fine dinner and danced the night away, joined by the Young Swiss for the Late Night Ball, to the tunes of Paul Errico Entertainment Orchestra.

The annual fundraiser is supported by the official sponsor of the Swiss Ball, Rolex, as well as UBS, Dynax, Gibney, Anthony & Flaherty LLP, Roche, SWISS, Swiss Re, Vontobel, Zurich to name a few. The 2016 Swiss Ball will take place on February 6, 2016 at the Cipriani 42nd Street and the Swiss Community in New York looks forward to another memorable evening.

Previous post:
Does urban living make us gain (or lose) weight? Next Post:
This startup’s got your back, literally